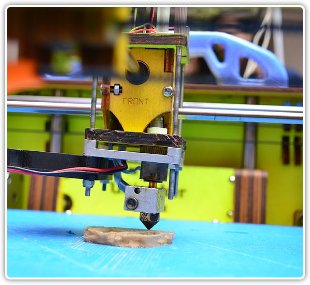 For nearly 25 years scientists, engineers and designers have been utilizing 3D technology. However, only now is this fantastic innovation beginning to be noticed by more people as its huge potential is recognized. The technology scientists played with in the laboratory using specialized ink materials creating everything from customized coffee mug to body parts and organs is now becoming available to everyone. Using cutting-edge materials and processes they are hoping to create a medical, industrial and even consumer revolution.

The phenomenon behind the 3D printing technology is born in its ability to recreate geometric objects of any kind with extreme complexity in a matter of hours. This technology has numerous advantages over the conventional processes and the applications in architecture, engineering, mechanics, biology, art, aerospace alone is awe inspiring. As processes are refined it begins to feel like science fiction as organs and bones could possibly be produced by printing and redefine the medial field. 3D technology is developing at such a fast pace that current conceptual dreams could be reality in the near future.

Skeptics abound in today’s culture, but that is typical of most huge advances in science and technology. Many people doubted a rocket would ever leave Earth’s atmosphere, let alone land on the moon. Personal computers and cell phones were completely unrealistic less than 40 years ago and no one could have anticipated the power of the internet and world wide connection. One cannot predict the future, but that does not stop us from hoping, dreaming, trying and succeeding.

There will always be challenges. Developing materials that are able to print objects as complex as organs and the ability for millions of people to print at different locations the same time. Some fear 3D printing technology would take away the power of production from corporations and put it in the hands of the ordinary people. For some simple products this may be possible, but it is doubtful an ordinary citizen would start printing transplantable organs or engine for space ships. For others it is the fear of mass production of firearms and weapons. The technology does exist, but the precision of design and function of printing such complex objects would still in the hands of the professionals.

The possibilities for good still outweigh any misuse. Printing healthy meals using the 3D printing technology is a near future realm and could potentially end world hunger. Meat and leather like materials could be created without killing. Imagine being able to save person’s life with the possibility to “print” organs, or to improve it by replacing artificial prostheses with ones as close as real, the next generation of implants. 3D printing has the potential to accomplish this. It inspires creativity!

The Possibilities for Tomorrow are Endless

The variety of applications of this progressive technology is growing constantly at the same time as the costs to own it are decreasing. With nearly zero waste in printing, the process and unlimited ability for customization is providing infinite possibilities. Its use in medicine and engineering are rising and promising. Perhaps one will not be able to print a functioning heart and transplant it in a person today, but tomorrow is coming, and it is coming quickly.

Want to join the discussion?
Feel free to contribute!

This site uses Akismet to reduce spam. Learn how your comment data is processed.

Introduce yourself and your program
Your information will *never* be shared or sold to a 3rd party.